First Harvest of the Light Root at Emerson College

Those of you who have read my blog post, “Rudolf Steiner and the Chinese Yam”, will already be familiar with the story of this extraordinary root and its ability to incorporate within its physical substance large quantities of the light ether, of which most of our foods are nearly or completely lacking (you can read more about the ethers in the post linked to above). This is the vegetable that Rudolf Steiner said should eventually come to replace the potato as a mass staple food crop.

In April 2015, Ralf Roessner, the German author of the book The Light Root mentioned in that post, came to give a talk to a large and enthusiastic audience at Emerson College in Forest Row, East Sussex (UK). Not only did Ralf talk about the light root but he also brought some samples of the root for planting in the newly refurbished biodynamic garden at the college. There is an account and a short video about this event on the Emerson College website here.

It has to be said that growing the light root is not quite as straightforward as planting potatoes. Nik Marten and his colleagues in the BD garden at Emerson took out a deep trench surrounded with wooden boards which they filled with river sand, chosen for its fine, rounded crystals (ie not sharp sand, which can damage the roots). They then added a layer of good loamy soil and compost. The rootlets brought by Ralf were then gently pressed into the surface and biodynamic preparations applied to the soil. A wooden construction about 8’ high was then put up just to one side of the trench to hold a series of vertical strings, up which the leafy stems of the light root plants could entwine themselves. As the top growth climbs the strings, the root surges downwards into the depths of the river sand. Paradoxically, it needs the darkness and depth in order to develop and preserve the light ether qualities. 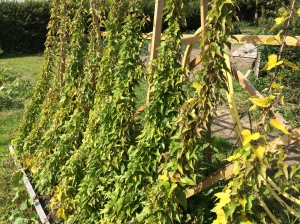 The light root stems growing up the strings of the wooden framework.

Six months later and Ralf returned to Emerson College to show us how to harvest and store the resulting crop. It was a damp and cold autumn day, with occasional showers – a typical October day in England! A group of about 15 people gathered in the BD garden and Ralf described some of the features that make the light root such an interesting plant. The roots with the light ether qualities grow only on male plants and if female plants grow with them, they will rapidly hybridise and produce all sorts of other yams, which may be perfectly good vegetables but do not hold the light ether. Ralf described how he had gone around the world seeking out samples of the yam, but only in the original growing area in China had he been able to source the right kind of plant. 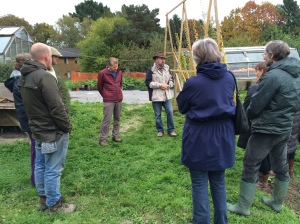 The group gathers around Ralf Roessner (in hat) to hear more about the light root.

Ralf then began to cut the leafy stems about six inches from the ground and as he began, several little mice began to scurry up and down the trench where they had obviously been living underground. This was a worrying sign – Ralf said that he had just come back from the Czech Republic, where the light root crop at a Camphill centre had been entirely eaten by mice. Despite this, the rest of the stems were cut and group members then began to lever up the wooden boards surrounding the trench so as to make it easier to harvest the roots. 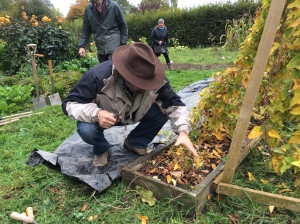 Ralf Roessner begins to cut the top growth stems away from the roots prior to harvesting.

Ralf and group members then began to remove carefully the soil from around each of the tufts left after the cutting-down of the top growth. After a while, we got down to the layer of river sand. Careful work with trowels and hands to remove the sand and keep it separate from the soil then began – the sand can be used year-after-year but should not be mixed with the soil. Gradually we could see the form of the roots emerging as the sand was cleared but this was delicate work – the roots can easily be broken if roughly harvested. Strangely, the roots begin to harden up, rather than soften further, in the days after the harvest.

Group members carefully scraping soil and sand away to reveal the light roots.

It was a thrill to see the first root emerge and to see that it was of good size – Ralf said that it was of very good quality. Thus encouraged, work proceeded to bring up the rest of the roots. Some of the roots had indeed been eaten by mice but only a very few – and those that had not been eaten were all of a good size and quality. Even to the eyes of a non-clairvoyant like myself, there is a radiance about the roots that is quite noticeable. The roots were laid in trays and, at Ralf’s suggestion, some of the cut leaves and stems were laid on top of the trays, which helps the roots to adjust to their new situation and to remain in good condition.

Ralf Roessner holding the first light root to be harvested at Emerson College.

The roots should be stored either in a clamp (ie straw is laid on the ground, the roots are put onto the straw, another layer of straw is added on top, and then the whole structure is covered with earth), although Ralf said that this method was vulnerable to attacks by mice; or in an earth cellar; or kept in the dark between 5-15 degrees Centigrade in river sand that is drier than that used in the trench. The roots should then last in good condition through until the next summer.

The light root requires special treatment after harvesting, too. It should not be washed, as water washes away the light ether very quickly. The roots come very clean out of the sand and a rub with a cloth is sufficient to bring them to sparkling condition. Nor should the roots be processed or cooked in machines using alternating current electricity, as this also destroys the light ether. It is best to have the light root raw in salads; or cooked in soups and sauces, where the liquid in which they are cooked is consumed by the eaters; or sliced with a knife and fried in a pan. Not all treatments are deleterious to the light ether, though – Ralf has observed that light root pounded in a mortar and pestle absorbs more and more of the light ether and this process can continue for hours. In an experiment he set up, the increase of light ether went on for up to 36 hours! 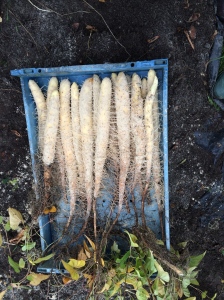 Radiant roots – some of Emerson College’s first harvest of the light root.

At lunch that day, Ralf came round with some slices of raw light root for us to try with our meals. There is a mucilaginous quality to the cut root, which is crisp like a water chestnut and it has quite a bland taste, which of course is an advantage for a crop that may one day become a staple food like the potato. I have also sampled some sautéed light root and it was delicious – I would be quite happy to eat it instead of chips!

In a question and answer session after lunch, I asked Ralf whether, given the fairly demanding cultivation requirements and the need for great care in processing the roots after harvest, if he had any indications of when it might be possible for the light root to begin to assume the role of a staple food crop. He said that his sense of it was that it would be about three hundred years into the future and that his role, and the role of a few others in various countries, was to keep alive the knowledge of the plant and how to cultivate it until the world was ready to take it up. He also said that in future times the light root would be cultivated in a different way – in water – and that he was already experimenting with ways of doing this.

This was a fascinating and inspiring day, which provided (literally) much food for thought. Thanks are due to Nik Marten and his colleagues in Emerson’s biodynamic garden, to Michael Williams and Heidi Herrman for their excellent translating skills and of course to Ralf Roessner for bringing his knowledge, light root samples and huge enthusiasm to Emerson College.