“This is a problem of nutrition.”

Mention of Ehrenfried Pfeiffer in recent posts has reminded me of the account he gives of a significant conversation with Rudolf Steiner. This was concerning the frustration experienced by Pfeiffer and others regarding their general “lack of spiritual experience in spite of all their efforts.” Dr Steiner’s reply was: “This is a problem of nutrition. Nutrition as it is today does not supply the strength necessary for manifesting the spirit in physical life. A bridge can no longer be built from thinking to will and action. Food plants no longer contain the forces people need for this.”

If that was the situation a century ago, how much worse must our situation be today? Nearly one hundred years on, the combination of depleted soils, chemical fertilisers, pesticides and now GMOs are providing even less support for the growth of truly nutritious food than was the case in Steiner’s time. Today we still think of food as primarily a kind of fuel for our engines; and therefore we are still without a science that can distinguish the innate qualities of foods beyond their value as fuel. Conventional medicine recognises only the physical aspect of food, which mainly amounts to counting calories and identifying the material nutrients such as protein, fat, carbohydrates etc. But are foods a mere assembly of matter -or is there something more, such as an invisible life-energy, and a coherent, ordered template conveying essential information?

As regular readers of this blog will know, the anthropopper is fortunate enough to work for part of the week at Tablehurst Farm, a biodynamic and organic farm in Forest Row, East Sussex in the UK. A friend and colleague, the chiropractor David Thomas, called into the farm recently to present us with a copy of an extraordinary book by the founder and leader of a small Swiss food company, A.W (Walter) Danzer, who has investigated over 50 foods, both organic and non-organic, in his own specially designed laboratory.

The book is called The Invisible Power Within Foods and is published by Verlag Bewusstes Dasein in Switzerland (ISBN 978-3-905158-17-5). In it, the author says: “I have discovered that organic foods possess an amazingly beautiful life-energy or order force (life design principle), whereas the life-energy of non-organic foods is generally weakened, disrupted or destroyed. Since I find this important I wanted to share it with you, so that you can make informed decisions.”

So far, so underwhelming, you might think – we are used to such arguments from advocates for organic and biodynamic food – but where is the scientifically credible proof of such assertions that could convince professionals in the fields of food, nutrition, health and disease? This is where Walter Danzer has made a great breakthrough. He has developed a method of researching the life-energy in water, food and other substances so as to provide images that arise solely from the water or food-substance itself, and can be understood immediately by anyone.

Danzer pays tribute to the results of pioneering predecessors: he mentions specifically the image-generating methods inspired by Rudolf Steiner, such as crystallising drops of food on a metallic matrix of copper chloride, as well as Masaru Emoto’s experiments with frozen water, and the work of Ehrenfried Pfeiffer and various naturopaths. But what Danzer was looking for was a process by which a suitable image would arise solely from the water or food substance itself, rather than from a metallic matrix that yields images that can only be interpreted by those with expert knowledge.

He appears to have triumphed. His method uses a precise standardised protocol to extract a test liquid from a particular food item, which brings to the fore the life-energy or “order force” of that food. Droplets of this liquid extract are then placed into a test tube, and dried and crystallised under specified, unchanging conditions. These dried drops are then studied and photographed under a microscope. The photos show not only the life design principle or order force of the minerals inside the food item but also in a form which can immediately be interpreted by anyone, expert and non-expert alike.

Danzer’s book contains photos resulting from his work with both organic and non-organic foods and some drinks, such as green tea and wines. He has not as yet published any photos looking at organic versus biodynamic foods, or organic versus natural Japanese cultivation, etc., but may do so in the future. He has, however, looked at the influence of a microwave oven on a herb and the effect of genetic modification on the life force of soy beans. 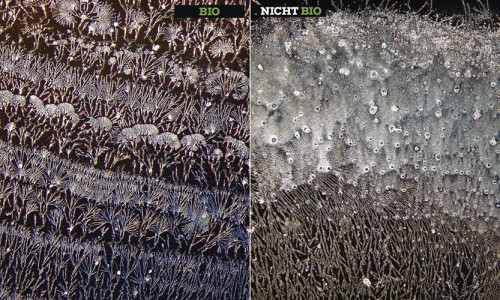 Walter Danzer’s photos – an organic apple is on the left, non-organic on the right

What do these photos reveal? The image of an organic apple seems to contain the figure of the entire apple tree, as well as the apple blossoms, seeds and even entire orchards of apple trees. In the non-organic apple, this natural essence is hardly visible anymore. It is blurred, lost and diffused into fragments. Startlingly, even in processed foods there are great differences between organic and non-organic ones. The structural arrangement of non-organic drinks and foods are shown to be amorphous, unorganised and without signs of life. The image of a soya drink made from GM soybeans looks like a lifeless, abandoned planet. By contrast, a drink made from organic soybeans shows what appear to be branches and even six-petalled blossoms.

Danzer suggests that when we first put food into our mouths, what happens is that the subtle energy of the food enters into our subtle body. The food first gives us its life, its wealth of information, its capacities, its knowledge, its order force (life design principle), its memories and experiences. All these are stored in the subtle body of the food. Foods are in fact highly developed information systems that sustain life. Foods are, of course, also fuels for our engine but only at the very end of the digestive process, and after our organism has first used the food in many other ways.

What is more, the way in which food is grown and prepared can create foods that go far beyond the power of their organic ingredients. Most of us can sense that a meal prepared lovingly by a family member is more nourishing for us than a factory-made ready meal; the life inside us also needs subtle nourishment. Humans, farm animals and pets need naturally grown foods that are both materially and subtly wholesome, and thus able to support life. Danzer’s photos show that there are foods that fulfill this need on a fundamental level – and these are organic foods.

For many consumers, of course, organic foods cost more than they are able or prepared to pay. Yet it is a fact that conventional agriculture incurs costs that the consumer is paying for in other ways but which do not affect the prices in the supermarkets. Water pollution, toxic residues in the entire food chain, antibiotic resistance, soil erosion, soil nutrient loss, desertification, poisoning of the honey bee, etc., are just some of the consequences of our current model of industrial agriculture – all of which the consumer will have to pay for, in one way or another – not to mention the health-weakening effects of eating non-organic foods.

In a just society, the ‘polluter pays’ principle would operate here – companies such as Monsanto and Bayer and non-organic farmers would be required to meet the full external costs of industrial farming. There is an excellent organisation in the UK (the Sustainable Food Trust) that has set out the case for True Cost Accounting here.

When true cost-pricing is finally brought about, in the face of huge resistance from all the vested interests, it is likely that organic foods will have lower prices than non-organic foods. There is already one nation, Bhutan, which has decided to allow only organic agriculture within its borders by the year 2020. If Bhutan can do this, there is no reason why other countries cannot set out on a similar path.

47 responses to ““This is a problem of nutrition.””