“A right good evening, the best of cheer…”

Throughout the Advent period and up until the end of the Autumn term, teachers and other staff in Steiner Waldorf schools around the world are to be found busy in rehearsals for one or more of three Christmas plays, which they perform as a kind of gift to the pupils, their families and friends over the holiday period.

These plays – the Paradise Play, the Shepherds’ Play and the Three Kings’ Play – are known as the Oberufer Christmas Plays, after an island in the Upper Danube where these plays were first noted down and collected by  Karl Julius Schroer. 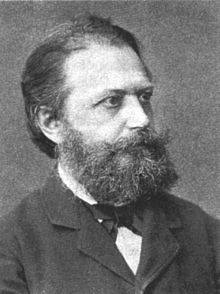 Karl Julius Schröer (1825 – 1900), who collected the Oberufer Christmas Plays and brought them to the attention of Rudolf Steiner.

For Rudolf Steiner, who grew up in the rural Austro-Hungarian villages during the latter part of the 19th century, Christmas was still a time which was not primarily about consumerism, but was instead a festival when love, philanthropy and what you might call “right living” was given a fresh impetus in human hearts. As Christmas approached, these villages were suffused by a mood Steiner later described as a kind of magical breath that filled the homes and streets with joyful, hopeful anticipation. Even the poorest peasant householder would dedicate a corner of their dwelling to a nativity scene made from figures they had carved themselves from wood.

As a boy, Steiner would see these nativity scenes when visiting his neighbours. It’s easy for us to forget that he was born into the rural working-class and this was the milieu in which he grew up. As an adult, he expressed his empathy with poor working people as a natural result of having grown up among them. The villagers of Steiner’s childhood not only decorated their homes with nativity scenes but they also took part in traditional seasonal pageants. On Christmas Eve they would re-enact the biblical stories of Adam and Eve and the expulsion from Paradise; and on Christmas Day the story of the Shepherds as told in the Gospel of St Luke. Despite their simple settings, props and costumes, the villagers took these plays very seriously, with preparations beginning at the end of the harvest season and with rehearsals taking place by lantern and candlelight. The actors were men and boys only, including those playing the roles of Mary and the angel. Those taking part in the plays had to observe certain rules and uphold high moral standards.

Steiner tells us that from his own observations of knowing the people involved, there were what he calls “utterly good-for-nothing fellows who would not dare to be dissolute as the days shortened. At Christmas time those who were invariably the most quarrelsome, quarrelled less and those who quarrelled only now and then stopped quarrelling altogether. A real power was active in souls at that time of the year and these feelings abounded everywhere during the weeks immediately before the Holy Night.” Steiner went on to say that “anyone who has lived among village people knows what the first rule of conduct signifies. The first rule was that during the whole period of preparation none of the actors might visit a brothel.” (I trust that the Waldorf teachers today are showing similar restraint. 🙂 ) A second rule was that no-one was allowed to sing bawdy songs or get drunk and the boys taking part were expected to be God-fearing and be capable of absorbing into their character the essence of the Christmas mood. The actors were also obliged to learn how to speak in strict rhythm and rehearse every movement and gesture in minute detail.

So when in later life Steiner was introduced to the Oberufer Christmas plays by his university professor Karl Julius Schroer, he immediately recognised what he described as the same “warm, magical breath of the Christmas mood” that he remembered from the village plays of his childhood. Schroer had collected these three plays in the local dialect from the island community of Oberufer in the Danube, where they had been performed for hundreds of years. 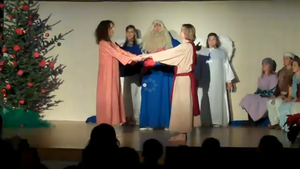 A photo of trainee teachers at Antioch University in New Hampshire performing the Paradise Play.

I think we can be fairly sure that Steiner further adapted Schroer’s texts of these plays. First, he separated the Shepherds’ Play from the King’s Play, which over the course of the centuries had been intermingled. Secondly, he recreated lost passages such as the part of the Tree-singer in the Paradise Play and the Shepherds’ supper scene. Thirdly, he corrected corrupt and meaningless passages. And finally, he adapted the language of the plays to a kind of Austrian folk dialect, which of course as an Austrian he was able to do. We may also assume that Steiner brought out and strengthened the ancient wisdom inherent in the plays. We know that he gave much time and attention to the rehearsal and production of the plays at Dornach, and he provided a spoken introduction to every performance whenever he could.

A production of The Shepherds’ Play from the Waldorf School of the Peninsula, Los Altos, California.

In common with some other traditions of Waldorf education that could benefit from a little updating, it seems likely that performances of the Oberufer plays have changed not one jot in the one hundred-odd years since they were first produced. As someone who trained as an actor before becoming involved with Waldorf education, I sometimes found that there was more than a touch of The Art of Coarse Acting about these school productions – and I suspect for many of the older pupils, these performances are received not so much as a gift from the teachers but more as a kind of reassuring but boring annual ritual that they have to sit through.

A production of the Three Kings’ Play from Highland Hall School, Northridge, California.

Despite the forgotten lines, the all-purpose mediaeval costumes, the Mummerset accents and the naff productions, I nevertheless found there to be a special, intangible quality about acting in these plays. It may sound fanciful but I experienced this as a blessing, a sense of grace. I found this particularly to be the case when playing Balthasar in the Three Kings’ play, but also when playing God in the Paradise play (typecasting, some might say). 🙂  Of course, those playing the Devil or Herod might have quite a different experience!  There is certainly plenty of scope for gifted directors, designers and actors to make something really good in an artistic sense from these plays but all too often in the schools, there is usually no time to do anything different than has been done for umpteen years before.

There is real wisdom in each of these plays and the text repays careful study and attention. Take the Paradise Play, for example, and the final speech that God makes just after Adam and Eve have been cast out of Paradise and after he has rebuked Satan for beguiling Adam and Eve into tasting the fruit of the Tree of Knowledge. It’s both powerful and thought-provoking:

“See now this Adam, such wealth he has won

Knowledge he has of Evil and Good

He can lift up his hand on high

I was playing the part, so I had to try to make sense of these lines. They reminded me of an earlier scene in the play, just after God has created Adam, and is showing him the Earth for the first time. God says to Adam:

“The earth with hills and mountains steep

I give thee – fishes of the deep and

Birds of Air, that by this hand I made,

I give to thy command.

And be the lord of all creation.”

God has invited Adam to become a co-creator, the steward of the Earth, although a steward who is so far lacking in the wisdom to run things properly.

So what do those last two lines mean, when God says that Adam “can lift up his hand on high, Whereby he liveth eternally”? Through acquiring premature knowledge of good and evil, before he was evolutionarily ready to take this on, Adam has become like a god. The image of Adam lifting his hand on high (and surely it’s his right hand he lifts) reminded me of a king with orb and sceptre. Picture a king with a sceptre in his right hand, which is used for directing and willing and with the orb in his left hand, which is used for receiving and holding – so Adam has become like a God or a co-creator with God and who now must learn to use his power with wisdom, which implies that there will be all kinds of painful lessons to be learned as mistakes are made along the way. And isn’t that a perfect image of humankind today, as we grapple with cloning and nuclear energy and genetic modification and all kinds of new technologies? We have the godlike powers but we are still trying to learn the godlike wisdom to use them properly.

What are the plays about? We could perhaps say that the Paradise Play is to do with the forces of Will, depicting as it does the beginning of Humankind.

We might say that the Shepherds’ Play is about Feeling and the light that gives warmth to simple shepherds’ hearts. It’s about empathy, the wisdom of the heart, the caring for one another that the birth of Jesus will reinforce and strengthen throughout the world.

And we could say that the Three Kings’ Play is about Thinking – and indeed it seems to me the play most closely aligned to anthroposophy, because the Three Kings are a kind of image of the seeking after of higher spiritual knowledge or the truths of esoteric Christianity.

I will be writing more about the Three Kings’ Play nearer the time of Epiphany, which is when it is supposed to be performed. But in the meantime, if you get an opportunity to go to one or more of these plays at a Waldorf school or elsewhere, why not give them a try and see what you think? And as the Angel says to the audience: “A right good evening, the best of cheer, The Lord of Heaven grant each one here…”

A Happy Advent Season to you all!

3 responses to ““A right good evening, the best of cheer…””